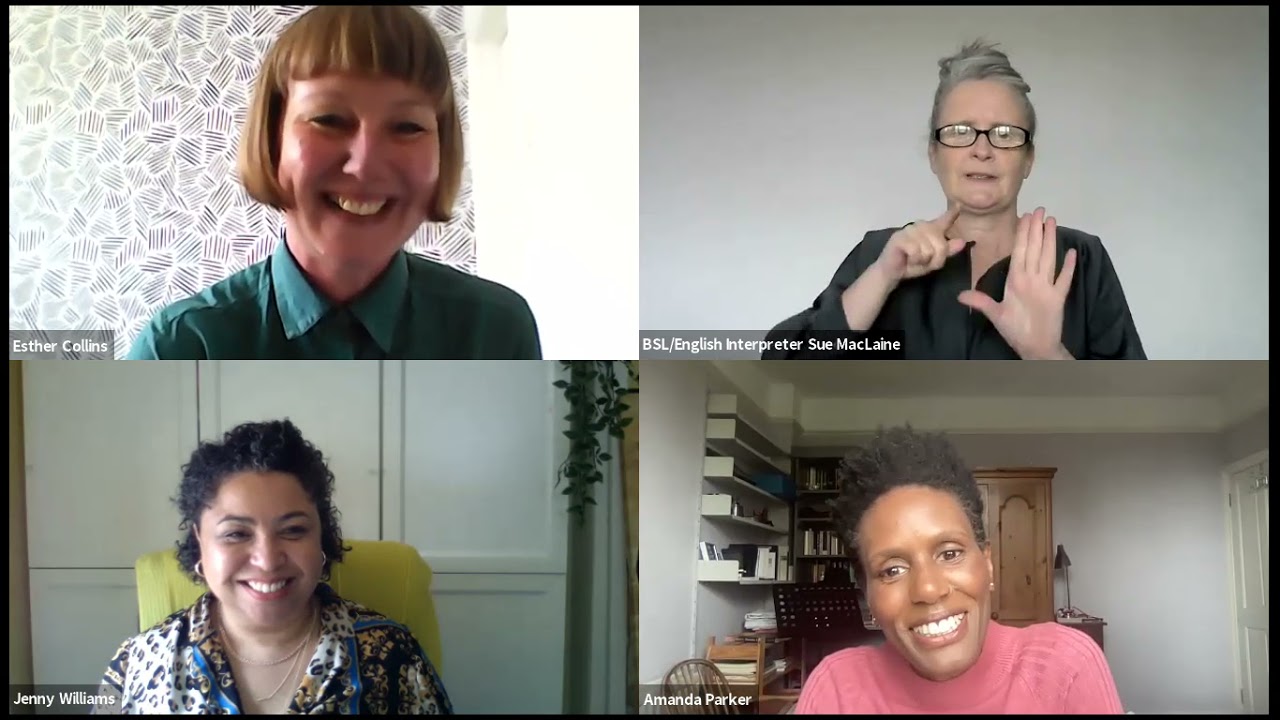 In this energetic online discussion, Amanda Parker (Founder and Director of Inc Arts UK) and Jenny Williams (Director of Revoluton and Towner Trustee) explore the challenges and opportunities in creating a more inclusive and diverse creative arts sector. Amanda and Jenny further share perspectives on building resilience and effecting change in the creative industries and practical applications in creating spaces where more voices, experiences, and people can be acknowledged.⁠

Amanda is the Founder and Director of Inc Arts UK, which advocates for the creative, contractual and economic rights of the UK’s ethnically diverse arts sector workforce. Previous Equalities, Diversity and Inclusion roles include her leadership of BBC’s recruitment and awareness campaign for the launch of BBC Radio 1Xtra, and as Head of Communications for Directors UK, Amanda was responsible for overseeing the UK’s first industry-wide research into gender diversity in TV directing.

A former broadcaster in BBC news and current affairs teams, Amanda’s previous roles include Development Producer for BBC Arts (TV) and BBC Radio and Music, as well as Campaigns management for BBC Education. Recognition for her work in EDI advocacy and campaigns include CRE Race in the Media, Royal Television Society, MIND Mental Health in the Media and the Stephen Lawrence Foundation awards.

Amanda’s advocacy includes representations to UK and European Parliaments on behalf of cultural and creative sector workers, and UK-wide campaigns on anti-racist action in the arts and cultural sector. Amanda is on the Arts and Culture Strategy Group for the Covid-19 London Government Task Force, the advisory board for the UK Coalition for Cultural Diversity, and the advisory board for Sheffield University's COVID-19 culture and arts recovery project.

Amanda has been a trustee of Film London since 2016, serving on the FLAMIN visual arts committee, as well as the communications and public affairs and audience development working groups; she is a trustee of Intermission Youth and was the inaugural chair of Parents and Carers in Performance Arts in 2017. Amanda is Director of London Short Film Festival, is an RSA Fellow, and a Clore Fellow.

Jenny is Director of Revoluton, Luton’s ACE funded Creative People and Places project one of 31 independent projects around the country based in areas where there are fewer opportunities to get involved with creativity.

Alongside this, Jenny is Founding Director of Take the Space a creative agency set up in 2006 with the aim of enabling artists from Black and British multi-ethnic backgrounds to Take their Space – and tell their stories. At its core, TTS is committed to telling stories that are generally not seen and not heard – and finding spaces that connect people with each other.

Prior to this, Jenny held numerous senior positions within the arts and public sectors including Head of Diversity, Arts Council England, National Office; Cultural Diversity Officer, Arts Council England South East; Education and Community Director The Kiln (formerly Tricycle); and Arts Development lead for both Mid Sussex District and Wandsworth Borough Councils; as well as her first job in the arts sector as Fundraising Officer for English Touring Opera.

Jenny was recently awarded a British Empire Medal (BEM) in the New Years Honours for services to culture and creativity, in recognition of Revoluton’s digital programme through the pandemic – an honour Jenny shares with the Revoluton team, Luton’s fellow creatives and audiences.