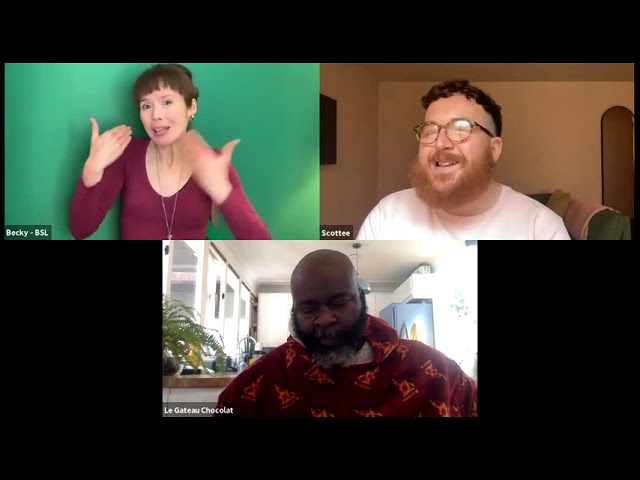 Join Le Gateau Chocolat and Scottee in conversation for the last of our series of online discussions for those in, or looking to enter, the Creative Industries.

With a mix of skill, experience, humour, and critique, Scottee and Le Gateau Chocolat will reflect on their respective routes into theatre and performance, what they love about the industry, and how to sustain creative, personal, and financial resilience within the crisis that performing artists currently face.

His children’s show Duckie premiered at the Southbank Centre in 2016, and was included in the Guardian’s ‘6 of the Best Shows for Children’ of the 2018 Edinburgh Fringe Festival. The show, which introduces young people to the ideas of otherness, tolerance and self-acceptance, has been presented at Theatre Royal Stratford East, Wales Millennium Centre, Roundhouse, Contact Theatre and across venues in the South East of England.

His recent production ICONS has toured to Sydney Festival, Wales Millennium Centre, Soho Theatre, Underbelly Southbank and more. ICONS has also been presented with accompaniment from the Little Coco Orchestra, a Le Gateau Chocolat initiative to support diverse musicians through the creation of an ensemble formed entirely of women of colour. This up-scaled production premiered at SPILL Festival in 2018, with a subsequent presentation at the Royal Birmingham Conservatoire as part of SHOUT Festival.

Le Gateau Chocolat’s work in theatre includes working at the National in Rufus Norris’ production of Threepenny Opera. Feste in Emma Rice’s final visionary production of Twelfth Night at The Globe (2017), Effigies of Wickedness – Songs banned by the Nazis (2018) a co-production between the Gate Theatre and English National Opera, Daddy Brubeck for the Donmar Warehouse’s production of Sweet Charity (2019) alongside Beverly Knight & Clive Rowe. He also appeared as part of Taylor Mac’s A 24-Decade History of Popular Music: The First Act at London’s Barbican Theatre (2019), Basement Jaxx & Metropole Orkest, Barbican. And as a featured cast member of two-time Olivier Award-winning cabaret and circus; La Clique and La Soiree.

Scottee is a self-taught artist who makes political performance. He is the co-founder of Scottee & Friends Ltd – a collective of artists, producers and participants working across the UK. Scottee is an associate artist at HOMEMcr and is one of the founding members of the Working Class Artist Group. Scottee is also one of the token working-class people allowed on BBC Radio 4, host of weekly podcast After the Tone and you can find thirsty selfies of him on Instagram.